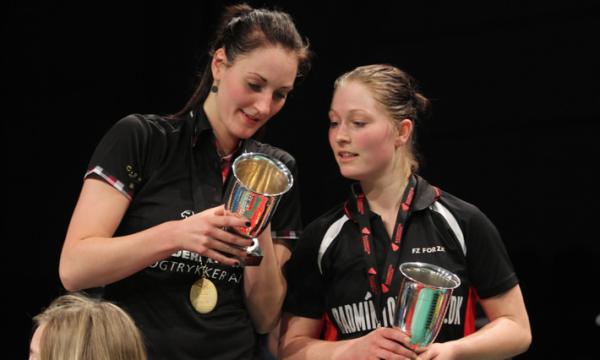 The Badminton Europe circuit heads to Denmark this week for the third instalment of the Forza Denmark International (15.000 US Dollars) which in its relatively short history has established itself as a high quality tournament with high quality competition with the cream of European talent in attendance.

This year the Arena Nord, home to Danish premier league team Vendsyssel, in the Northern Jutland town of Frederikshavn will once again play host to this International Challenge rated tournament and as the event celebrates its third birthday Denmark’s Line Kruse and Maria Røpke will be looking to make it a hat trick of victories to complement their success from 2011 & 2012.

The Danish doubles pair have had a rough ride following their rise to fame reaching the All England semi-finals in 2011 and in an injury influenced season the pairs run to the quarter finals at the recent French International has been the highlight of their season.

But as the old saying goes ‘form is temporary and class is permanent’ is sure to ring true in the case of Kruse and Røpke (pictured) as they take to the courts in defence of their title in Frederikshaven. As fourth seeds the Danes will have to come from the middle of the pack and a likely semi-final shoot out against Russians Biblike & Chervaykova should set the Danes up for a third final appearance with the main threat coming from newly crowned European Junior Champions Stefani & Gabriela Stoeva of Bulgaria or veteran Swedish pair Emma Wengberg & Emelie Lennartsson.

Viktor Axelsen the one to beat

Like Kruse and Røpke, Danish number 3 Viktor Axelsen is coming to the end of a testing season which showed so much promise after his run to the final of the French Open Super Series way back at the beginning of November.
Axelsen himself was first to admit that things had gone a little pear shaped mid-season but a well-deserved holiday and his subsequent victory at the Dutch International has re-ignited the Axelsen flame and as top seed in Frederikshavn he is certainly the one to beat with the recent form to substantiate his top seeding.

Defending champion Henri Hurskainen is back to defend his title which he won in what was a golden month for the Swede this time last year. However this time around Hurskainen is emerging back on the circuit after wrist surgery on an injury he sustained in the 2013 European Mixed Team Championships in Russia in February and as a result is sure to harbouring some off court cob webs coming to Frederikshavn.

As always Dutch ace Eric Pang is one to watch as this is effectively a home court for Pang as he plays all his club badminton for Vendsyssel but has always come up short at the Denmark International.

Women’s singles is an open book

The women’s singles is an open book with any one of 8 players being in with a real shout of achieving the top step of the podium. Sandra Maria Jensen is defending champion but her participation is still in question after sustaining an injury at Dutch International two weeks ago.

Kjærsfeldt, Zetchiri and Gavnholt will be battling it out at the top half of the draw while Olga Konon and Kirsty Gilmour are the favourites to come through the bottom half of the draw. For Konon the tournament is all about her slow and steady return from surgery before a serious assault on the world ranking list in the new season and Kirsty Gilmour makes the trip to Denmark to build on her semi-final performance from 2012 and, lest we forget, her attempt to win her fourth tournament of the season after a blistering start with three victories back in September & October.

The mixed doubles should see a Danish pair on the top of the podium on Saturday afternoon. Quality pairings flood the draw with the pick of the crop being Bonde & Røpke, Astrup & Helsbøl and recent Finnish Open Champions Lena Grebak and Anders Skaarup.

Team GB have sent a very small representation to Denmark this year and their best bet for a podium spot comes in the shape of Scottish/English duo of Ellis & Van Rietvelde. However with Kolding & Bonde on the GB pairs side of the draw it will be a foolish man who would bet against an all Danish final.
Home advantage and an abundance of talent is sure to work in Denmark’s favour in Frederikshavn this coming week and a switch to Saturday finals can only serve to make the atmosphere even better than previous years as the Danes go for 5 gold’s from 5 events.

You can watch the 2013 Denmark International live on our YouTube channel.