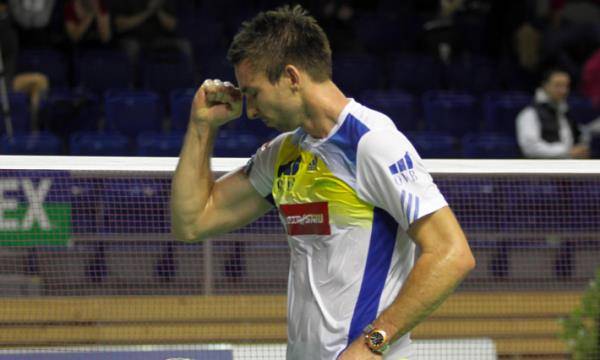 Home grown hero Petr Koukal (pictured) overturned the form book this afternoon in Brno to advance to the last eight of the Yonex Czech International. Even as top seed for the tournament many didn’t give the Czech number 1 much chance against the inform Chinese Taipei player Lin Yu Hsien in their second round match on Badminton Europe’s TV court this afternoon.

The Chinese Taipei player had beaten some top class players en route to his semi-final in Belgium two weeks ago and his victory in Poland last week made him the player to beat in this 2013 edition of the Czech International.

Koukal had been out since the beginning of August recovering from a knee injury and as a result had no tournament match practise in the lead up to his home international. In a strange twist of fate the break was a blessing in disguise for the Czech number 1 as he looked the fresher of the two men on court which pleased his fanatical home fans.

It was Lin who got off to the best start leading 12-6 but a relaxed Koukal never looked worried and bounced straight back with a run of 8 straight points to lead 14-6. Cheered on by the home support both men traded game points before Koukal took three points in a row to take the opener 24-22.

The second game was a little more straight forward for Koukal who started to dominate the rallies and offer minimal attacking opportunities to his opponent. Once the interval was taken care of Koukal stepped up a gear to ease into the quarter final with a controlled 21-14 win.

“I think my two months away from tournaments has been a blessing as I feel so fresh and motivated right now. It was important for me to put in a good performance for the home crowd on this my home club court even though many did not give me a chance. It was nice to prove people wrong today”

French duo Thomas Rouxel and Lucas Corvee rounded off a good day for the French singles players as both advanced to the quarter finals justifying their seeding.

Schaller back fresh and motivated

Independent Swiss player Nicole Schaller followed in Koukals footsteps as she too took to the Czech courts for her first tournament of the season. Schaller has been bothered by a meniscus tear and a period of enforced rest has also proven beneficial to the Swiss talent.

Schaller took little time in seeing off the challenge of Ukraine’s Natalya Voytsekh before booking her quarter final berth with a two game victory over Daniella Gonda of Hungary.

“When you find out you need to take some time out because of injury it can be very disappointing but the disappointment soon changes to motivation and desire to get back fit again and the break was needed and now I feel much fresher” said Schaller to Badminton Europe.

Scotland’s Kirsty Gilmour got her title defence of to a perfect start and looks the main European threat to the recent Asian dominance on the European circuit. Gilmour never lost more than 11 points a game in her two opening matches and will now play Cheng Chi Ya the runner up from Belgium and winner of last week’s Polish International.

Article and Image by Mark Phelan (Live in Brno)