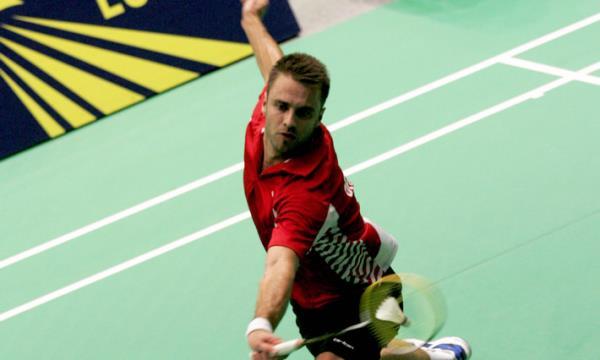 Joachim Persson battled his mental demons to come through a tough encounter against German Lukas Schmidt to advance to tomorrow’s quarter final at the 2013 Belgian International in Leuven. The well-travelled Dane dropped the opening set against Schmidt and almost threw away a 20-7 lead in the second before eventually taking the tie to a decider 21-18.

In the deciding game Persson opened a 11-3 lead and looked to be cruising however another lapse in concentration allowed the powerful German back into the set and Schmidt could hardly believe his luck as he tied the game 12-12.

“There was a problem with a call when I was leading well in the deciding game. I had some words with the umpire and I think I let it affect my concentration for a bit and before I knew it Lukas was right back in the set.”

The former world number 5 was not in any mood to let the match slip however and showed great determination and fight to see the match through 21-16 to book a quarter final berth against European silver medallist Henri Hurskainen.

“I have had nearly 8 months of solid training without interruption or injury and that is starting to pay off for me now” said a happy Persson. “I can feel my condition and speed getting better and I feel I can control matches again where before I had to chase them”

Elsewhere top seed Eric Pang came through in Typical Pang fashion, laid back and relaxed on court and the name of Italian player Indri Bagus Ade Chandra will also line up in the quarter finals after coming through qualification.

Linda Zetchiri put her good form this week in Belgium down to the fact that she is enjoying her badminton without pressure and the Bulgarian clearly enjoyed her three set win over Danish number 1 Line Kjærsfeldt this afternoon in Leuven.

After trading the opening games 22-20 the match was finely balanced but Kjærsfeldt looked tired in the deciding set something that Zetchiri noticed and seized upon.

“Even after two hard sets I felt good” said the Bulgarian to Badminton Europe straight after her victory. “I noticed Line was starting to slow in the third so I just stayed focused and calm and was confident I would pull through”

Kirsty Gilmour, Stefani Stoeva and Karin Schnaase make up the quarter finals from a European perspective in a draw that is heavily dominated by Asian opposition.

Robert Blair and Imogen Bankier cruised through their main draw matches today in Belgium to establish themselves as firm favourites to lift the title on Saturday. The Scottish duo, buoyed by their victory in Ukraine last week, have not dropped a set en route to the quarter finals and have a confident swagger about them this week in Belgium as they attempt to go back to back.

“I think we have travelled well since Ukraine last week and we were happy today with the wins over the Asians and Danes in two games each” said Bankier to Badminton Europe.

The Scots however will need to take their game to another level with the presence of Vislova and Durkin in the quarter final field and Danish duo, Skaarup & Grebak have brought their end of last season form to Belgium and are real contenders for the podium in Leuven this week.

To watch on demand and all the live action from Leuven on Badminton Europe’s Youtube channel click HERE.

Article and Image by Mark Phelan (Live in Leuven)