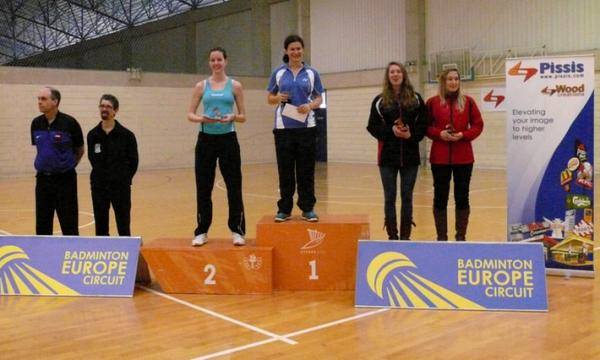 The 2013 Cyprus International event saw success for the top seeded players with Wales in particular having a good haul of three titles. In the mixed doubles, Oliver Gwilt/Sarah Thomas of Wales took on Belgium’s Nathan Vervaeke/Sabine Devooght. Untroubled in the first game, the Welsh held on despite a much improved performance from Vervaeke/Devooght to take the match 21-10, 21-17.

The women’s singles went with seeding as Linda Zetchiri (Bulgaria) beat Carissa Turner (Wales) in a simple match, the score finishing 21-15, 21-9. Turner’s disappointment was not long lived however as she later returned to court with Thomas, victor in the earlier mixed match, to beat local challengers Maria Avraamidou / Stella Knekna in the women’s doubles. Never behind, the solid Welsh pair won 21-14, 21-13 in just 26 minutes.

Irish shuttler Scott Evans followed up his title in his home International in December with victory in Cyprus beating England’s Andrew Smith in two. Coming from behind in the first game, Evans improved throughout the match and a much better second end saw the match finish 21-17, 21-11.

The only match of the day to go to three games was the men’s doubles, where Welsh pair Joe Morgan/Nic Strange faced Sam Parsons/Rhys Walker of England. A close first game saw extra points required as Morgan / Strange came recovered from trailing most of the game to take the end 24-22. Parsons/Walker recovered their composure and did not let their lead slip in a similarly close second game which ended 19-21, but to no avail as the Welsh pair powered away in the deciding rubber to capitalising on an 11-5 mid-game lead to take the match 21-14.

The Organizing Committee would like to thank all participants, players, officials and line judges for their contribution to a successful tournament and we wish them all the best for future events.

Click here for all results of the 2013 Cyprus International.