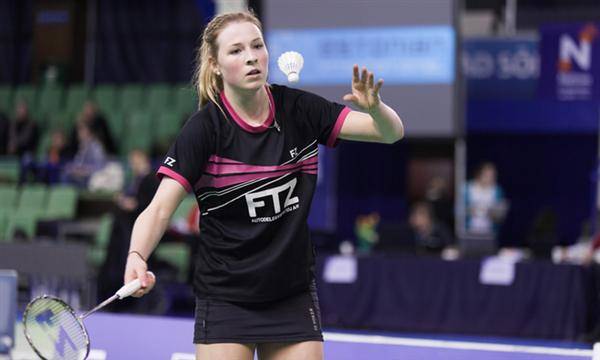 The final day of 2013 Yonex Estonian International saw many interesting encounters. The current World Junior Champion Kento Momota of Japan took the title in the men’s singles as he beat surprising finalist Eetu Heino of Finland. Heino, who had taken down the top seed and home crowd favourite Raul Must in the semifinals, got off with a good start and led 20:13 but needed seven game points to secure the first game 22:20.

In the women’s singles event, the number four seed Dane Line Kjærsfeldt (pictured) met Natalia Perminova of Russia. In a tight match, Kjaersfeldt — after losing the first game — managed to win the most important points in the end of the next two games and this gave her the Yonex Estonian International title with the score 13:21, 21:18; 21:18. Kjærsfeldt, who also won the Irish International a couple of weeks ago, is currently ranked 100 in the world rankings.

In the men’s doubles finals, French duo of Laurent Constantin and Matthieu Lo Ying Ping won their first title together as they defeated the Finnish pair of Iikka Heino and Mika Kongas 21:11, 22:20. In the women’s doubles, the top seeds Irina Hlebko and Ksenia Polikarpova of Russia had to fight hard to outplay the young and talented Danes Julie Finne-Ipsen and Rikke Hansen 15:21, 21:19, 22:20.

And the mixed doubles crown went to the top seeded Anton Kaisti and Jenny Nyström of Finland.

Article by Renna Unt and photo by Serge Enkoff.