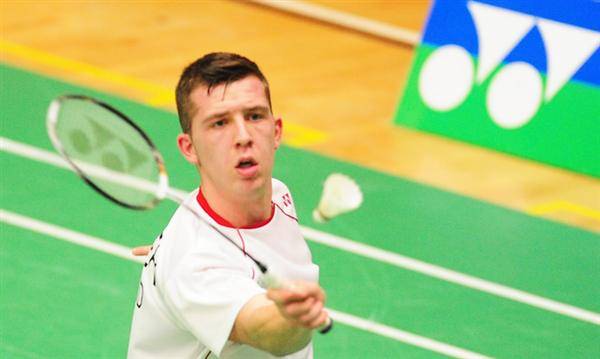 The upgrade of the Yonex Welsh International Championships has brought an increased entry for the qualifying rounds especially in the men’s singles event. Despite some good personal performances in the men’s singles, the Welsh trio of Gareth Day, Matthew Barrell and Rhys Thomas were unable to progress in the tournament.

One of the highlights of the qualifying matches was a superb three game match between Alex Marritt and Daniel Groom with Groom winning the third set 22-20 and progressing to the main draw alongside Prakash Jolly and Velavan Vasudavan (India), Petter Yngvesson (Sweden) and England’s Alex Lane, Tom Wolfenden, Sam Parsons and Rohan Midha.

In the Men’s doubles the Anglo-Welsh pairing of Jamie Pugh and Gareth Cox were unable to progress after losing a tight two setter to Bambrick and Baczala. Progressing to the main draw are Jamie Bonsels/Alex Fowler, Oliver Baczala/Conor Bambrick, Adam Hall / Adam Martin, Thomas Heiniger/Christoph Heiniger.

In the Ladies doubles the one qualifying pair were Alice Feesey/Zoe Hallam.
In the Mixed Doubles, Ellen Mahenthiralingam and Rob John had a good 3 game win in the first qualifying round over the English pairing of Bambrick and Moore before going down in two sets in the second round to Young and Chan-Lam also of England who now progress to the main draw. Other pairs progressing to the main draw are: Tony Murphy and Jennie King of Ireland, Michael Roe and Victoria Williams of England and Tien Chen Chou and Mei Hui Chiang of Chinese Taipai.

Check out all results including live scoring by clicking HERE.

Article and photo by Badminton Wales