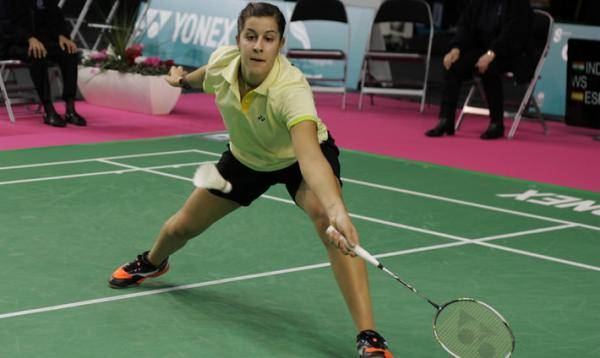 Carolina Marin (pictured) got off to a shaky start in her first round match against India’s Trupti Murgunde as she battled mentally to put the foot injury she sustained at the Bitburger Open behind her. This coupled with the financial crisis in Spain, which has resulted in Marin travelling without her coach to recent tournaments would have been enough to break the resolve of most athletes but the gutsy Spaniard came through her opening  round match proving the mental side of her game has not been effected by recent events on and off the court.

The world number 31 and second seed for the tournament got off to a slow start in the opening game as she clearly struggled to adjust to conditions in the expansive Emirates Arena in Glasgow. Trailing 5-0 and 13-8 it was the Indian who look most comfortable and appeared to have the measure of Marin. “I started very slow and I was thinking about my foot after the injury at Bitburger. Mentally the beginning of the game was very hard for me” said Marin.

A run of 5 points without a reply suddenly ignited the fire within the Spaniard and Marin visibly felt more comfortable on court secure in the knowledge the troubled foot was well healed and ready for tournament action. Marin went on to take the opening game 21-17 before running out an easier winner in the second game 21-8.

“It was difficult for me without my coach as I prefer to have him with me but because of the financial crisis in Spain my coach has not been able to travel with me so I am having to adapt and think more for myself on court. I am happy I came through and it is also good that here at this tournament I only have one match on the first day which is good for my foot and for me mentally” said Marin to Badminton Europe.

Elsewhere in the women’s singles draw the recent good form of Sashina Vignes Waran was thwarted by the youthful Kurumi Yanao of Korea and Olga Konon is clearly showing no ill effects from 6 months out of the game through injury as she destroyed young English hopeful Chloe Birch in two sets 21-7 21-7.

In the men’s singles Kieran Merrilees dealt admirable with the weight of home pressure in the very first match on court this morning. The Scottish number one got off to a terrible start losing the opening game 21-11 against Austrian Michal Lahnsteiner. After an extended discussion with Scottish head coach Yvette Yun Luo, Merrilees came bouncing back in the second and third to take the match in three games.

“It was not pretty to start with and I struggled to focus. I got my act together somewhat after the first game but overall my performance was pretty average and I will need to be much better in tomorrow’s second round” said Merrilees to Badminton Europe.

The heartache continues for Kestutis Navickas after the Lithuanian continues to struggle with his form that has clearly deserted him after his injury of last year. The number 11 seed eventually going down to Danish youngster Flemming Quach in two sets 21-8 21-16 who looks refreshed after his 6 week tournament break following the Czech International. “I decided to have a break after Czech to re charge the batteries and it is good to be back and playing well. I had the right plan against Kestutis and I knew he was struggling mentally with his own game so I forced him into making errors” said Quach to Badminton Europe.

In the men’s doubles top seeds Fuchs and Roth cruised through in two games while Anders Kristiansen and Anders Saarup made light work of seventh seeded Swedes Lundqvist and Nordh after coming through qualification yesterday. The Danes now look firm favourites to lift the title on Sunday.

To re visit all the action from today’s games as well as watch the post match interviews log onto Badminton Europe TV by clicking HERE.

Article and Image by Mark Phelan (Live in Glasgow)