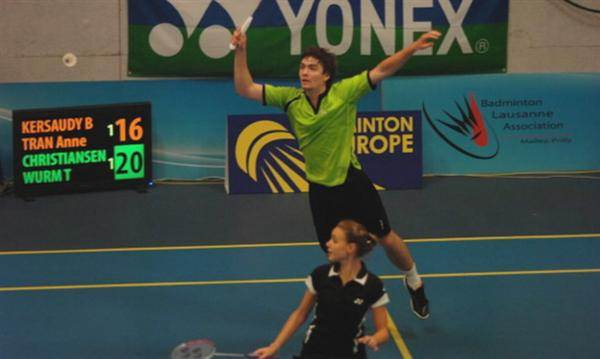 Some players came to Lausanne with only one goal: to win the tournament and to earn points to be seeded at the World Junior Championships in next month.

The Danish singles player Ramus Grill did it in a good way winning over a tired Fabian Roth of Germany in two straight games. Ramus did not lose any game during the tournament in Lausanne and showed a very good performance — on and off the court. And Fabian, maybe the player with the best balance in his footwork, was too tired to be a real opponent, because he had also took part in the men’s doubles competition with Lars Schänzler.

Mathias Christiansen (DEN) had the same thing in his mind like Rasmus: to win the tournament and to earn rangking points. Normally he does not play junior tournaments anymore, and in Lausanne he showed why. A powerfull game in doubles with his team mate from Denmark David Daugaard and in Mixed with the German girl Theresa Wurm (she is really small but amazing in her reactions on the court), he won all 10 matches on last weekend.

The women’s singles category was dominated by Malvinne Ann Venice Alcala from the Philippines. Coached by her father, she won the final against the Belgium player Marie Demy, who eliminated the top seed Delphine Lansac (France) after 54 minutes. Marie already had had stomach problems before the finals, but tried her best in the first game until she had to give up.

But finally one victory for France in women’s doubles by Marie Batomene/Stacey Guerin who beat Germans Anika Dörr/Franziska Volkmann in two games.

Alongside the BEC tournament it is tradition in Lausanne to organize a tournament for the U17 players. The rising star came from the Philippines: Mark Shelley Alcala — the 13 years old brother of Malvinne. He won the tournament in singles — and everybody in Lausanne think, that he has the chance to become a real good player in future.

The tournament at Lausanne had reached it’s limit. 260 players from around  30 nations pushed everybody to their limit — players and also the organizing team. But like a well-running swiss watch and thanks to the help of the CAK-Sport team from Basel (they also run the Badminton Swiss Open) with their electronic equipment like TV-screen with the players name behind every court, the tournament ended as scheduld on Sunday afternoon. See you again next year.

Article and photo by Michael Dickhäuser