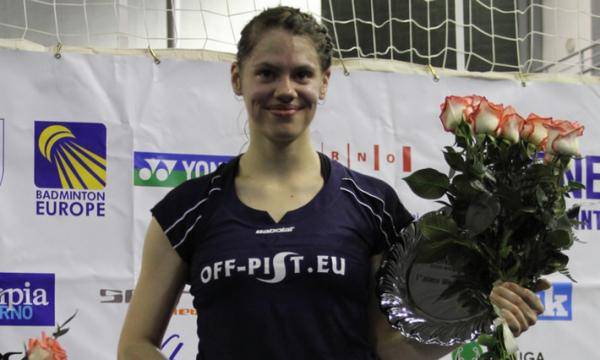 The city of Brno plays host to the Thwack Czech International this coming week and the local badminton crazy fans will be hoping that local girl Kristina Gavnholt can retain the title she won last year. The Czech number 1 comes into the tournament as top seed and is sure to feed on the home support as she attempts to pull off a very rare feat in top level badminton, back to back titles in your home international tournament.

Gavnholt’s victory last year proved to be a very emotional rollercoaster ride for the now Danish based Czech athlete and it served to set her on her way to a successful Olympic qualification. This year she returns with an added weight of expectation on her shoulders but returning to her homeland is sure to be enough to stir her emotions and will to win and her consistency on tour means she is certainly one of the favourites to lift the title.

Gavnholt’s biggest threat is most likely to come from recent Belgian International champion Sashina Vignes Waran after the French girl broke her tournament duck and will be full on confidence this coming week. Vignes Waran will have to get by some tricky opposition in the bottom half of the draw in the shape of Michelle Chan Ky but based on the form books the French girl looks to be the most likely stumbling block to Gavnholt’s charge.

The focus of all attention in the men’s singles will fall on the shoulders of Petr Koukal. This homecoming tournament will attract a lot of media attention for Koukal and his progression in the tournament will depend a lot on how he copes with all the attention.  As 7th seed Koukal is set to meet defending champion Przemyslaw Wacha at quarter final stage and the Pole on paper is the class performer in the field. A lot will depend on the rustiness of the world number 29 as this is his first post Olympic tournament but Wacha is always good for at least 3 circuit wins in a season and he is sure to be in the frame of mind to get his season off to a winning start in Brno.

If Wacha was to slip up others such as Ville Lång, Joachim Persson and the golden old boy of European badminton Dicky Palyama will be looking to add the Czech title to their vast array of International victories.

Wacha will also feature in the men’s doubles alongside recent Belgian International winner Adam Cwalina. The crack Polish pair are sure to uphold the tradition of Polish doubles and they are a good outside bet for the title on Sunday. Elsewhere Team GB has sent their developing pairs to Brno and don’t right off the chances of Ellis and Van Rietvelde meeting up with Cwalina in the final for the second time inside two weeks.

Team GB will look to take home the spoils on Sunday in the women’s doubles. With several strong pairs travelling to Brno don’t be surprised if there is an all GB final come Sunday. Jenny Wallwork pairs up with Alex Langley and the exciting duo of White and Smith certainly have the potential and chemistry as a partnership moving into the future.  Scottish duo of Cooper and Gilmour have fond memories from last year’s semi final run and if all clicks the Scots have a real chance this week to lift their first title as a pair.

Finally the mixed doubles is so open that any one of eight pairs are in with a realistic chance of success. Team GB again as always have strong representation in the mixed events and the combination of Marcus Ellis and Gabby White look to be the best bet on paper for the GB contingent. Also watch out for the re-introduction of French beauty Laura Choinet along with partner Ronan Labar after really impressing is a handful out outings last season as a pairing. Others sure to feature are Polish 3rd seeds Szkudlarczyk/Wojtkowska and top seed Ukrainian pair of Atrashchenckov and Kobceva.

Badminton Europe TV will be live streaming a selection of play on Thursday and Friday with all quarter and semi finals from the streaming court on Saturday and Sunday. To view just click HERE and follow Badminton Europe on Facebook by clicking HERE for a live photo gallery and details of the daily matches being streamed.

Article and Image by Mark Phelan