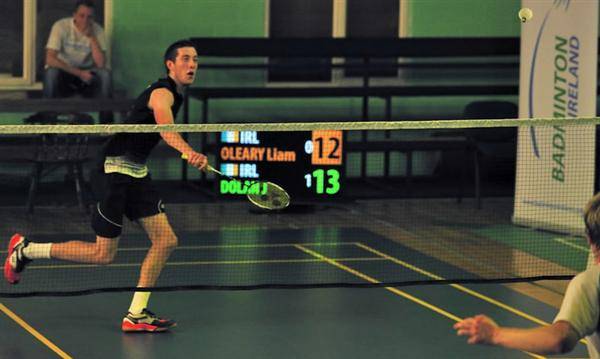 In the First of the Final’s it was Rachael Darragh Vs Alannah Stephenson. Both Girls had been impressive on their way to the final, and it was the favourite Alannah Stephenson who got off to the best start taking the opening set 21-6. In the Second Set Rachael started the game well and after a number of unforced errors from Alannah, Rachael found her confidence and from here she controlled the second set winning 21-14. In the Third set everything Rachael tried seem to come off, with a series of shuttles rolling over the net as Rachael continued to take the game to her Older opponent with great success taking the title with a final set score 21-15 in a 34 minute match.

In the Men’s Singles Jonathan Dolan faced Joshua Magee in another All Irish final. The number 2 seed Talent group player Dolan started the game with great pace taking the opening set 21-6. In the Second set Joshua fought his way back into the match and at the Interval Dolan was now leading by one point 11-10. From the break at 11 Dolan came out and lifted the tempo once more and went on to take the final with a second set score line 21-14.

In the Mixed Doubles Ciaran Chambers and Caroline Black of Ireland faced the Scottish partnership of Adam Hall and Caitlin Gilmour. This was an exciting match with the game swinging both ways with the Irish controlling the Opening set and the Scottish controlling the second set. In the Final Game the Irish played the bigger points best and demonstrated good control under pressure winning the game 21-16 19-21 21-17  in 32 minutes.

In the Ladies Doubles Ellen Mahenthiralingam and Aimee Moran got a walkover from Rachael Darragh and Alannah Stephenson due to an Injury Stephenson had picked up in the singles earlier that day.

A very Successful weekend for the Irish players as they picked up valuable points on the World and European rankings. The event Organisers gave great thanks to all who had volunteered to make this tournament such a great success, including the Line Judges, Umpires and match Referee’s involved.
Next up for the Irish under 19 players will be the Swiss U19 open where Dolan will look to make it three international title’s in a row after his title in Bulgaria.