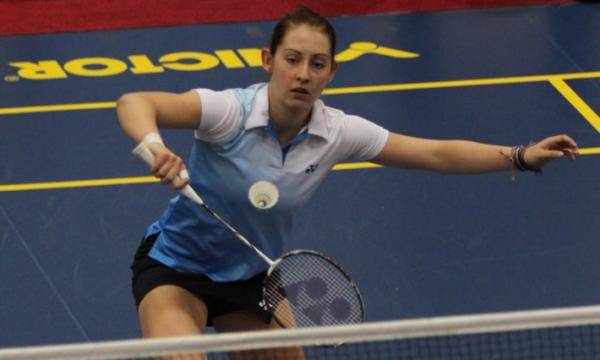 Semi finals at the 2012 Polish open was all about young Scot Kirsty Gilmour (pictured) after she blasted her way through the early rounds of the tournament. Gilmour proved this evening in Lubin that she is the form player of the tournament as she advanced to the final with a demolition of Laura Vana in two games. Gilmour had come into the semi finals without dropping a set and even more convincing is that fact that she never dropped more than 15 points in any one game en route.

Today’s match up against Laura Vana had the potential to be tricky for Gilmour after the Estonian beat top seed Kamila Augustyn in the quarter final earlier in the day but Vana was never comfortable on court against the ‘jump smashing’ Scott and Gilmour ran out an easy 21-7 21-16 winner in just 24 minutes. “I have been working hard all summer and to be honest it was great to come to this tournament and play against some girls as I have been training with the boys for last few months”

The young scot is certainly one of the up and coming stars of the European game and with high hopes she hopes to use this tournament as a platform to greater things. “I will only be at home for 4 weeks between now and Christmas and one of those weeks will be the Scottish International. I hope to step up to play a few Grand Prix’s and Grand Prix Gold tournaments to test myself against tougher opposition” said Gilmour of her short term plans.

There was double delight for Scotland as Kieran Merrilees booked his final berth here in Poland as he ended the hopes of Ukrainian outsider Kyrylo Leonov in two straight games 21-10 21-19. It was a good day all round for Merrilees after beating top seed Kestutis Navikas in the earlier rounds.

The debutant English mixed pairing of Jenny Wallwork and Andy Ellis continued on their merry way but were made to fight against the youthful Ukrainian pair of Natarov and Kazarinova. The English duo took the opening set 21-21 but the Ukrainians found something in reserve to level up at 1 set a piece. A run of 11 points on the serve of Andy Ellis in the decider took the English into a healthy 16-4 lead from which they never looked back as they advanced to the final in three games.

“It was not pretty at times and the second set was just awful from our perspective. We got a real grip on the third game and now we are just happy to be in the final” said Ellis to Badminton Europe. It was not the best service day Jenny Wallwork had but she remained upbeat after the victory: “There were a few dodgy serves with some crazy spin on them which is something I have to look at but all in all we have to be happy with a final in our very first tournament”.

The mixed final is sure to be a tense affair as the English will take on home favourites and top seeds Szkudlarczyk and Wojtkowska. The Poles have looked dominant all tournament and with the backing of the home crowd will probably go into tomorrow’s final as slight favourites.

To revisit all today’s action and watch the best of the final action tomorrow on the live stream just log on to BEtv by clicking HERE.
To view the Facebook tournament gallery follow Badminton Europe by clicking HERE

Article and Image by Mark Phelan (Live in Poland)