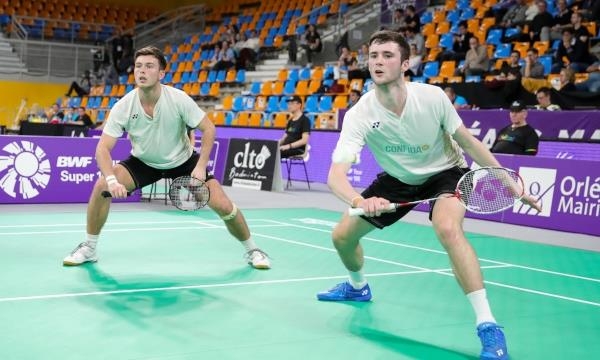 The most eventful match of the day goes to the Scottish Men’s Doubles Adam Hall and Alexander Dunn who managed to come through a three-game match despite health issues.

The pair from Scotland had to overcome Dunn’s problem with blood sugars to turn around the match which they lost the first game 14-21, against Nikita Khakimov and Alexandr Zinchenko from Russia.

Midway through the match it was clear that something had happened to Dunn, and it had, the Scots’ tournament was in God’s hands, but luckily, he managed to overcome a low blood sugar problem.

Dunn has type 1 diabetes, but this is the first time that he has ever been worried mid-match, his partner, Hall was also concerned.

My blood sugar went low, first of all, I thought it was just nerves but during the second, I was really not feeling good, Alexander Dunn said.

I struggled to see, my shots were terrible and I was doing anything to try and slow my heart rate down, he commented.

He has told me he has this problem and it might happen but it never has, I was quite worried at one point, but he is alive, so we are good! (laughs).

You can watch the full interview with the Scottish Men’s Doubles pair on our YouTube channel.

Hall/Dunn came into this match, as the clear favourites but with Dunn not training for a week due to injury, world rankings went out of the window.

The pair did not start well, losing the first game 14-21 but in the second, Hall/Dunn managed to pull togetherness won 22-20.

The match was not finished there, with a third game which could have gone either way, Hall/Dunn managed to take the match, by winning the third game 21-16.