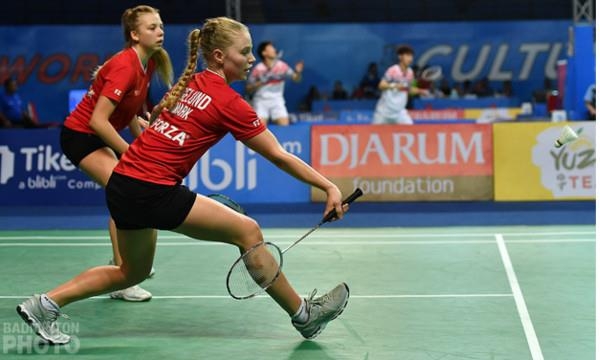 The Dutch international was very successful for young Danish players. Denmark was represented in all five finals and managed to turn four of them in their favor. Only Mads Christophersen was not able to keep up with Harsheel Dani (India) in men’s singles, but it still took three games to put him down.

Little sister Line Christophersen had some more success. She had to overcome a huge challenge at quarter final stage against Qi Xuefei (France). In an immense fight she was with 26-24 9-21 and 25-23 the one who took the win.

This was the only huge obstacle Christophersen needed to overcome. In the semi-final and final it was obvious she had it easier. Yaelle Hoyaux (France) was put away in 23 minutes with 21-6 and 21-13 in the semi-final.

Clara Azurmendi (Spain) could only challenge Christophersen in the first game of the final. Then Christophersen took complete control and secured the win. Finally a title for the 19-year old teenager, after being so close the past year!

Alyssa Tirtosentono and Debora Jille (The Netherlands) are progressing well since their transition from the juniors to the elite circuit. Of course, Jille already gained experience with Imke Van der Aar, but it is nice to see she takes Tirtosentono with the flow.

Even nicer: Tirtosentono and Jille reached their first European circuit final together at the Dutch International, which is very close to home for The Hague-based Tirtosentono.

After a long and exciting three gamer, Tirtosentono and Jille lost to the more experienced young pair Amalie Magelund and Freja Ravn. Magelund and Ravn may also just have left the junior circuit, they are playing together for already more than two years. With their current progress, we might hear a lot more of them in the future!