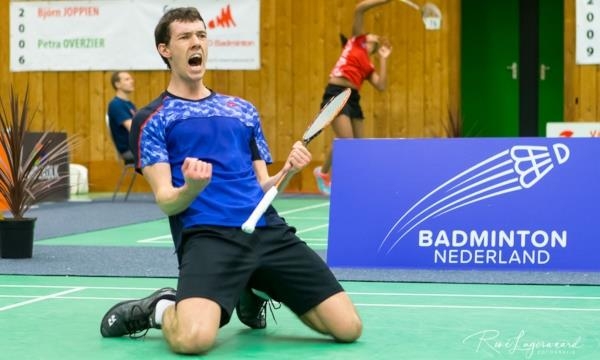 Mads Christophersen (DEN) is one of many changes in the BEC Elite Circuit Ranking – and the youngster is happy with his achievements.

Following his final at the Dutch International last week, Christophersen has moved from position 14 up to the seventh place in the BEC European Elite Circuit Ranking.

The Dane managed to reach the last two of the tournament, but he was unfortunately not able to beat his Indian opponent, Harsheel Dani, who won a three-game match which Christopherson was in full control of, after the first game.

The 21-year old has revealed that he is happy with his improvement, which he showed, as he reached the final of the Dutch International.

Christophersen is also adamant that there is more to the ranking to focus on, but is happy about the jump into the top ten.

— I am happy about my performance at the Dutch International 2019. I am most happy about my level, I felt that that the things I have worked on since Austria Open worked in the Netherlands, Christophersen said.

— I am glad that I have moved up in the ranking, but my focus, right now, is not on the ranking but on the game, he added.

As well as the Men’s Singles, there have been changes in the other four categories, with Line Christophersen moving up from 50 to 26th position after winning the tournament last week.

The up and coming Danish star managed to push the seventh seed, Clara Azurmendi from Spain, aside, winning the first game 21-19, before taking full control to win the second 21-14.

As well as the Singles, there have been changes in the three Doubles categories, with Daniel Lundgaard/Mathias Thyrri moving from 33rd place to 20th place after their win against Australian opponents on Sunday.

In the Women’s Doubles, the winners of the tournament last week, Amalie Magelund/Freja Ravn moved up from number 12 in the ranking to 11, while the runners-up, Debora Jille/Alyssa Tertosentono from the Netherlands, moved from 99 up to 44 in the ranking.