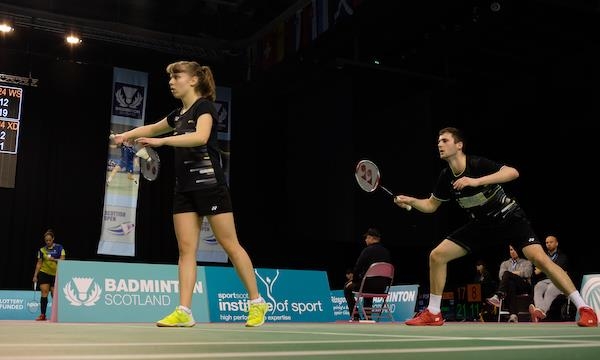 Julie Macpherson and Adam Hall are ready for the semifinals at Scottish Open.

The last months has been up and down for the Scots, who are seeded four in the tournament, but this week in Glasgow is has been more up than down.

In the round of 16 Macpherson and Hall beat Danish Amalie Magelund/Mikkel Mikkelsen for a spot in the quarterfinals and for the second time in two days, the Scots had the upper hand against Denmark.

Not under pressure
Hall and Macpherson won in straight games, 21-14 21-14, against Daniel Lundgaard and Julie Finne-Ipsen.

— We are really happy to get the win. I think we played very well in patches but sometimes we lost focus. It was tight in the beginning of the first game, but we got the lead, and in the second game we are 8-2 up but lost a bit of focus, Julie Macpherson said.

— I did not feel that we were under pressure, but there was times where we not serving and returning good enough, and that we need to do better in the next round, Adam Hall added.

Denmark – again
In the semifinals the Scots will be facing another Danish pair: Mathias Christiansen/Alexandra Bøje, to whom they lost last week in Irish Open last week.

— I think the next round will be tougher. We lost a tight three game match in Ireland, but hopefully we can be in the other end tonight, Macpherson mentioned.

— We played a really good match in Ireland, but we did not get the luck, and they had a few lucky shots in the second game. I think we should come out with the same focus and intensity as we did last week, Hall said.

See all the results from Scottish Open here