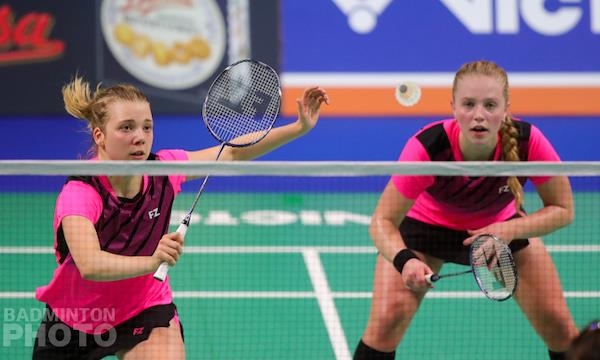 Before their first ever international matchup the number six seeds, Amalie Magelund and Freja Ravn, were the favourite to win the Scottish title against fellow Danes, Julie Finne-Ipsen and Mai Surrow, but the young Danes came under pressure from the beginning.

Big lead
Finne-Ipsen and Surrow were off to the perfect start taking a 7-0 lead before the youngsters got their first point on the scoreboard.

The winners of last week’s Irish Open got closer but could not close the gap. The seventh seeds won the first game 21-17. It was the first time in nine matches that Ravn and Magelund dropped a game.

— I do not know if we were not ready, but we made too many mistakes and we were not “on court”. It was not our best game, Amalie Magelund stated.

Youngsters pushed back
Ravn and Magelund, who in 2019 have won Swedish Open, Dutch Int., Polish Int. and Irish Open, had a hard time controlling the defence, and Finne-Ipsen and Surrow once again built up a big lead, but this time Ravn and Magelund pushed back.

After trailing 10-6 they took the lead at the interval and controlled throughout game forcing the final into the decider winning 21-15.

— We told each other that we did not have to win in the defensive game today. We needed to get the offence because, our defence was not the best today, Ravn mentioned.

— I think we played in a high pace and that made the difference, Magelund added.

On Saturday after the semifinals Freja Ravn told Badminton Europe that “it would be so cool to win back-to-back titles”. Now she knows what it feels like.

Freja Ravn and Amalie Magelund are the Scottish Open women’s doubles champions beating Mai Surrow and Julie Finne-Ipsen 17-21 21-15 21-6 in a match lasting 55 minutes. It is the first time in 19 that a Danish women’s doubles pair wins the title in Scotland. In 2000 Pernille Harder and Majken Vange claimed the title.

— It feels amazing to win back-to-back titles. We are so happy that we came out with the win today. Maybe it was not our best game, but well… we did it, Freja Ravn said.

See all the results from the Scottish Open finals here