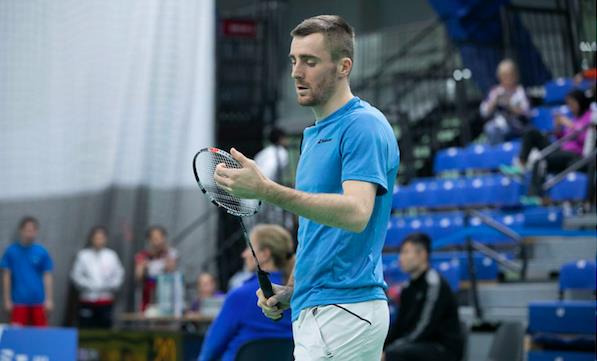 The semifinals at Estonian International 2020 had a majority of asian players and the European players needed to find their best game to compete with them.

The first matches played in the semifinals were the mixed doubles. Sebastian Bugtrup and Isabella Nielsen, Denmark, were playing the strong Japanese players, Yujiro Nishikawa and Saori Ozaki. The Japanese were not looking back and in 20 minutes, they had made their way to the final with a 21-12 21-8 win against the Danes.

The second mixed double was between Alzbeta Basova, Czech Republic, and Anton Kaisti, Finland, and the first seeded Japansese, Tadayuki Urai and Rena Miyaura. Urai and Miyaura won the match in straight games but had to fight a lot harder than their countrymen to get to the final. They won the match 23-21 22-20.

Japan against France once again

Vimala Heriau and Margot Lambert were the first French women’s doubles to go on court. Playing against Mizuki Otake and Miyu Takahashi from Japan, the first game was a close one where the two pairs followed each other all the way to 18-18. Here Heriau and Lambert took three quick points and also the first game. The second had the same pattern, but the second game went to the Japanese 21-16. In the final game the French had the lead all the way through and ended up winning 21-13.

— It was a tough match. We managed to lead in the third game, which makes it a lot easier mentally, Lambert said.

— It is really nice to be into the final. We are seeded one, so we hoped to go to the final, but we did not know the level of the Japanese, so we are really happy that it went well, Heriau ended.

The second women’s doubles to go on court were Sharone Bauer and Juliette Moinard playing Rena Miyaura and Saori Ozaki from Japan. It did not take a lot of minutes before Miyaura and Ozaki were leading 11-1 and the rest of the match had the same pattern. The French were leading one time in the second game, but after 23 minutes the Japanese were through to the finals after a 21-8 21-12 win.

Another final between France and Japan

Lucas Claerbout from France against Takuma Obayashi from Japan was the first men’s singles to be played. The first two games of the match were close with Claerbout winning the first 22-20 and Obayashi winning the second 21-16. But after playing for over an hour, Obayashi did not have much energy left in the last game and the French won it 21-9.

The last European to go on court was the home crowd favourite, Raul Must. Even though the Estonian player had the whole venue cheering for him, the Japanese opponent, Hashiru Shimono, was too strong and won 21-18 21-8.