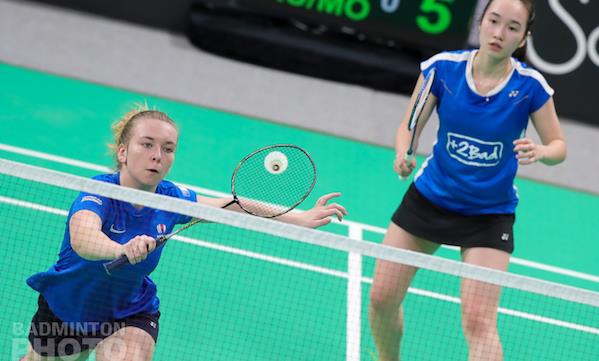 The semifinalists for women’s doubles has been found.

Sharone Bauer and Juliette Moinard from France were facing the fourth seeded Hungarians, Daniella Gonda and Agnes Korosi, in today’s quarterfinal. With not a lot of problems, the French pair managed to keep focus and win the match 21-19 21-12.

— We got some short matches thanks to our easy draw. Then this match against Daniella Gonda and Agnes Korosi was harder with a lot of long rallies. But we managed to keep focus and push ourselves. We are really happy to reach our first semifinals together in women’s doubles. Next match will be tough we will fight and give our best, Bauer and Moinard said.

Later today they will play Rena Miyaura and Saori Ozaki from Japan.

Two out of two

Vimala Heriau and Margot Lambert were the second French women’s doubles pair to play in the quarterfinals. They were playing Vytaute Fomkinaite and Gerda Voitechovskaja from Lithuania.

Mizuki Otake and Miyu Takahashi from Japan will be Heriau and Lambert’s opponents in the semifinal later today.

At 16.00 (CET) you can watch the semifinals in the Badmintonlive App.