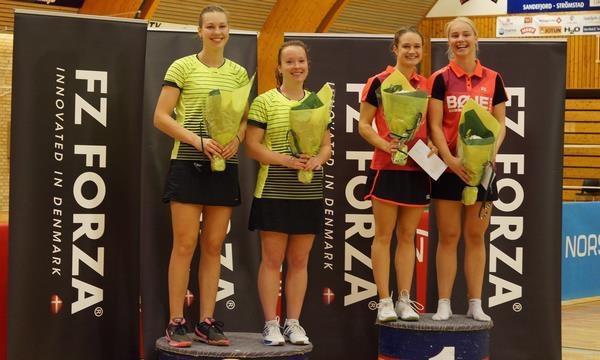 The final day of the Norwegian International saw victories for two pairs from Denmark.

Men’s doubles pair Joel Eipe and Philip Seerup came out on top against the number four seeds from England, Matthew Clarke and David King.They won the first game 21-8 before narrowly missing out in the second game losing 18-21. However the Danes fought back in the final game to win 21-19 and get that first place.

Later on in the day, Danish womens doubles pair Alexandra Boje and Sara Lundgaard went on to win their finals match 21-19, 21-9 against fellow Danes Isabella Nielsen and Claudia Paredes.

Making another appearance in the mixed doubles finals, the Danes saw themselves get second place against number one seeds from England, Gregory Mairs and Jenny Moore. The English pair won the first game 21-11 and despite a comeback in the second game from Boje and Molhede, Mairs and Moore were just too good in the final game as they went onto win comfortably 21-11.

Another player from Denmark was also involved in the final of the men’s singles, David Kim was facing up against Hermansah from Indonesia. Kim started off well winning the first game 20-22, but Hermansah came back to win the final two games 21-12, 21-15.

Elsewhere, the only match that didn’t feature a player from Denmark was the women’s singles. Europe still had a presence in the final with Kristin Kuuba from Estonia. However she was facing up against the number three seed Saii Rane from India which proved to be just too much as she unfortunately lost 21-18, 21-9.