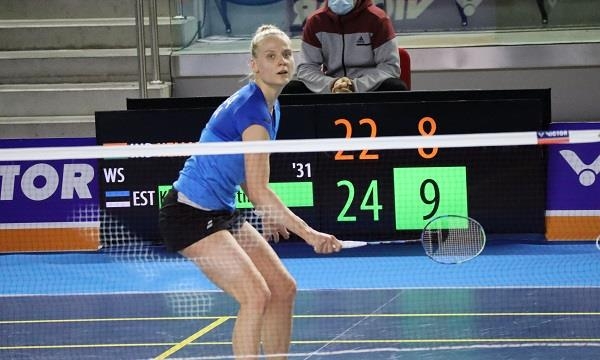 The ENEA Polish Open 21 by Victor came to its conclusion yesterday after a week of entertaining badminton action. While Malaysia imposed their strength in three categories, Estonia and Turkey took the women’s singles and doubles.

Following the withdrawal of number one seed Kirsty Gilmour, the path to glory in Gniezno became a little bit clearer for second seed Kristin Kuuba, however, it was not by any stretch a given.

After strong opening rounds against Vivien Sandorhazi and Beatriz Corrales, Kuuba faced Malaysia’s Eoon Qi Xuan, finalist of the Malaysia International in 2019. In a tough three-game duel, Kuuba came back from one game down to grind out a win.

Kuuba showed great strength in the semifinal against India’s Sri Krishna Priya Kudaravalli, winning in two straight games. Three years ago, at the White Nights, she had to do it in three.

Kuuba reached her first final since her Lithuanian International win in 2018. Facing another Indian opponent in 17-year-old Tanya Hemanth, who defeated two Centre of Excellence players in Gayle Mahulette and Martina Repiska the day before, it was a hard final to call.

The opening game saw the young Indian take a 17-13 lead, however, Kuuba, 24, has experience of being in 14 finals to call upon and managed to pull it back and take the game 24-22. Rattling her opponent, the Estonian went on to take the second game 21-14 along with the title.

-I was still able to pull out the victory even after many setbacks throughout the tournament. I’m happy with my performance and satisfied with how I managed to handle these difficult situations, Kuuba wrote on her Instagram.

Junior champions get fifth title
Once the Turkish pair of Bengisu Erçetin/ Nazlican İnci got going, there was no stopping the 2018 European Junior gold medallists from picking up their fifth title from 10 finals.

Erçetin/ İnci had to go to three against the Spanish combination of Clara Azurmendi/ Beatriz Corrales in the opening round. However, once they got into their rhythm they swiftly reached the final where they faced the home Polish pair of Zuzanna Jankowska/ Anastasiia Khomich.