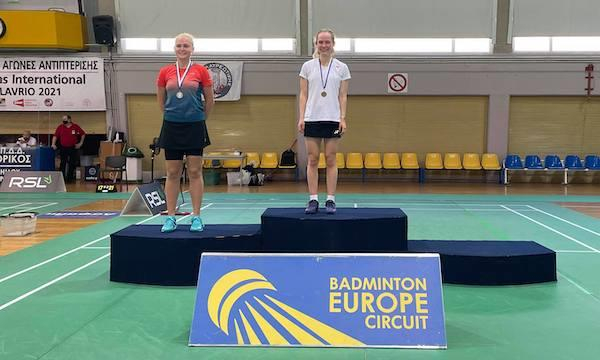 The English women’s singles champion was the only European winner at Hellas International 2021.

Malaysia dominated the final day of the BEC Future Series tournament, Hellas International 2021, winning four out of the five finals played on Sunday.

The Norwegian mixed doubles players, Carl Christian Mork/Solvår Flåten Jørgensen, Jan Louda and his countrymen Ondrej Král/Adam Mendrek (Czech Rep.) and the Italian women’s doubles Katharina Fink/Yasmine Hamza all lost in the finals, but in the women’s singles final, it was a different story.

Second title in two weeks
The reigning English women’s singles champion, Abigail Holden, and the young Hungarian talent, Vivien Sandorhazi both made it to the final, and delivered an intense and interesting final on the court in Lavrio.

Sandorhazi, who was seeded as number four, won the opening game 21-18, before the number eight seed bounced back winning the second game 21-15.

Abigail recently claimed the women’s singles title at the English Nationals, and now she is also back on winning titles on international level.

One of the big wins
For the first time since Czech Open 2019, Holden finished on top of the podium winning the decider 21-18.

— I am surprised and so pleased with how well the last few weeks have gone for me. I think I gained confidence from winning the English nationals a few weeks ago, and I was able to take that forward to help me in Hellas.

Want to challenge the best
Finishing on top of the podium in back-to-back weeks, Holden has set her eyes on the next target.

— My goal is to challenge the best players in a Europe and continue to improve my world ranking.

— The next tournament for me is Sudirman Cup at the end of the month which is a huge challenge and I’m really looking forward to it, the English women’s singles champion said.