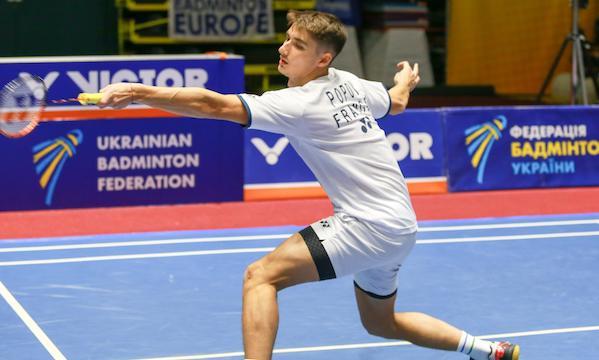 It has been a good weekend for European talent in the Ukrainian capital, with four out of the five champion titles going to European players.

The VICTOR Ukraine Open 2022 hosted a successful event that culminated in a thrilling semifinal and final day on Sunday to close the week, with Asian, American and European talents — including some of the home favourites — fighting for the titles. With four out of the five gold medals going to European representatives, this is how it went in each of the categories.

Huge win for Christo Popov
Malaysia was close to getting two titles in Kyiv but France’s top talent at the event stopped them from doing so. Christo Popov, who was a clear favourite in the Ukraine International Challenge, had a good run towards the final despite the challenges posed by the Malaysian side.

Both Kok Jing Hong and Lee Shun Yang, who he met on his way to the finals, had a three-game challenge for the Frenchman. Popov still worked his way to the deciding match where he met yet another Malaysian player, Ong Ken Yon, who won his encounter in the semifinals against Luka Wraber, 21-14 21-14.

Popov got to win the first game with a comfortable gap while Ong upped his game in a second game that saw the Malaysian pushing the French player in the first part of the decider. However, Popov got to win the match coming back from a game point down, 21-14 22-20, for what will be his second singles senior champion title — his first one being the 2019 Italian International.

— Hoping for many more to come! Next week, the National Championship. I can’t wait, said Popov about the French Nationals, which he won back in 2020 to become the youngest national champion.

Demirbag gets on the Ukrainian podium once again
Home queen Maria Ulitina was close to getting her hands on the title just as she did in the same event in 2010 as a singles player, but also in 2010 and 2017 in the doubles categories. Yet, Aliye Demirbag stopped Ulitina in a semifinal that saw the Turkish player advancing to the final in the fight for the gold, 21-13 21-16.

Just like Ulitina, Jenjira Stadelmann won a bronze in the event. The Swiss player got some big wins including defeating the other home favourite, Polina Buhrova, 22-20 21-13. Stadelmann faced Wen Yu Zhang in a tough three-game match that saw the Canadian player advancing onto the final, 17-21 21-13 21-15.

The final between Zhang, who won the silver at the Welsh International Challenge last year, and Demirbag, who was the 2018 Kharkiv International runner-up, had the top seeded Turkish player winning the title in straight games, 21-13 21-16.

Malaysian comeback masterclass
In perhaps the match of the tournament, the men’s doubles final was tense from beginning to end. Danes Emil Lauritzen/ Mads Vestergaard who claimed two titles out of their impressive three finals together last year were hunting another one in 2022. Their opponents were the Malaysian Swedish Open runners up – a repeat of the quarterfinal in Uppsala.

The Danish duo was on the brink of revenge after taking the tight opening game, they found themselves with a match point at 20-19. Three vital points later, the Malaysians forced a decider.

Emil Lauritzen/ Mads Vestergaard, although disappointed to miss their golden opportunity continued to stay on top. This time they secured two match points. Chia Weijie/ Low Hang Yee have demonstrated how dangerous they can be coming from behind and they proved it once more, taking the title 19-21 22-20 23-21, dropping to the floor in celebration with the Danes rueing their missed chances.

German mixed doubles dominance
With five mixed doubles pairs in the draw, it was perhaps no surprise to see an all-German final. Jones Ralfy Jansen/ Linda Efler were the experienced partnership leading the way, not dropping a game on the way to the final. One more solid display against compatriots Jan Colin Völker/ Stine Kuespert granted them the title, 21-12 21-11.

Jansen was delighted to be back to winning ways with another title, the first one for them as a partnership.

-Looking forward to having more titles like this, also with Jan Colin Völker, he said making reference to his new men’s doubles partner and his opponent in the mixed doubles final.

Kuespert/ Moszczynski win again in Ukraine
Stine Kuespert featured in two finals in Ukraine, playing with Emma Moszczynski in the women’s doubles. The pair were winners of the Ukraine International 2021 and enjoyed themselves once again, always looking in control on their way to glory.

Mariia Stoliarenko/ Yelyzaveta Zharka flew their country’s flag on finals day but were unable to pressure the solid game of the Germans who won, 21-18 21-12.

Stoliarenko, just 17, will take a lot from this experience and simply shared this message with her fans.

-We’ll be back stronger. It was a fantastic tournament.