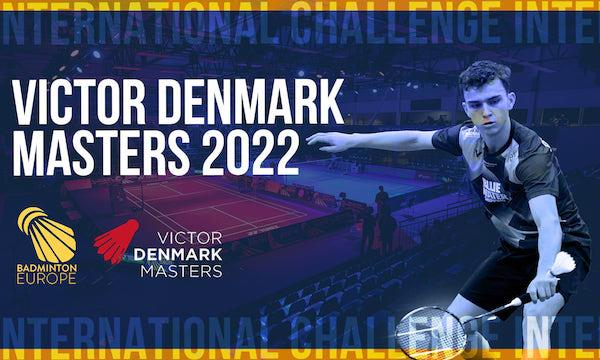 Matches have already started at the VICTOR Denmark Masters 2022. You can follow all the action on www.badmintoneurope.tv.

With all eyes set on Indonesia these weeks, the spotlight will also shift from today to the town of Hillerød, north of Copenhagen in Denmark, for another edition of the acclaimed VICTOR Denmark Masters. The qualification round has just begun, and the best will be competing in the main draw from tomorrow for this year’s titles.

Last year’s women’s doubles champions, Amalie Magelund/ Freja Ravn, have had to withdraw due to Ravn’s injury. However, Magelund will be competing alongside Mathias Thyrri, another player who was a champion in 2021—in men’s doubles, together with Daniel Lundgaard.

This year, Lundgaard will be playing with Joel Eipe, with who he reached the Orleans Masters semifinals this year, and their first clash will be against third seeded Eloi Adam/ Julien Maio. The Dane will also be playing in mixed doubles with Sara Lundgaard. The unseeded French duo Lucas Corvee/ Sharone Bauer are another mixed pair to watch out for, and so are Mikkel Mikkelsen/ Rikke Søby, 2022 European Championships bronze medallists.

There will be a special appearance at the event. This year’s Denmark Masters will be played at Mads Conrad-Petersen’s badminton club and, despite having retired two years ago, he will be stepping on court to play with Germany’s Jan Colin Voelker.

Chinese Taipei’s Wen Chi Hsu, who has won three golds in the European Circuit so far, is top seeded in women’s singles. Some names that will also be competing for the title are Ksenia Polikarpova, Polina Buhrova, Rachael Darragh, and Jordan Hart.

As for the men’s singles, the seeded list is topped by Toby Penty and there are some strong contenders there too, including Felix Burestedt, Max Weisskirchen, Cheam June Wei, and Mads Christopherse. Young talents such as Magnus Johannesen and Alex Lanier could also be earning some great results at the event.

Badminton Europe’s Centre of Excellence will also have its representation at the VICTOR Denmark Masters 2022 with a line-up of some of its permanent players. Martina Repiska, Anna Mikalkova, Katerina Tomalova, Elena Alexandra Diordiev, and Milan Dratva will all be competing.