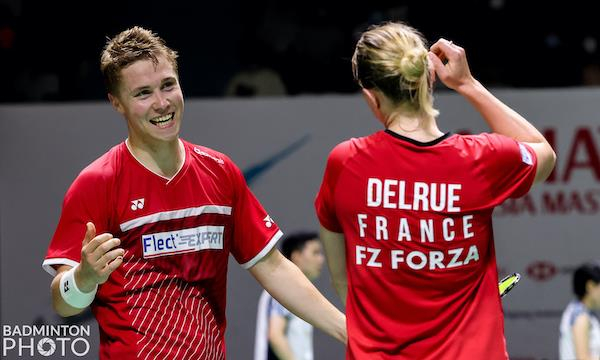 The young French pair are the only other European representatives alongside Viktor Axelsen in the Super 500 semifinals.

Thom Gicquel/ Delphine Delrue are through to the semifinals amidst a hotly-contested mixed doubles draw. Having already shocked the current world champions and the world number ones Dechapol Puavaranukroh/ Sapsiree Taerattanachai in the opener, they eked past Mathias Christiansen/ Alexandra Boje in the second round. The European Championships 2022 runner-ups delivered a tactical performance against Tang Chun Man/ Tse Ying Suet, the fourth-placed pair in Tokyo.

The young duo was always in control, overcoming the erratic Hong Kongers 21-15, 21-10. Up next, the usual underdogs are the favourites against the Thais Supak Jomkoh/ Supissara Paewsampran. Elsewhere, Seo Seung Jae/ Chae Yu Jung avenged their loss in Tokyo to the eventual gold medallists Wang Yilyu/ Huang Dongping. The Koreans won 19-21, 21-10, 21-14.

Axelsen marches on, Kjaersfeldt exits
While Viktor Axelsen was clinical in dispatching Ng Ka Long Angus in straight games 21-13, 21-9 for an astounding 11th time, he will face a tough opponent tomorrow. The all-conquering Dane will lock horns with Anthony Sinisuka Ginting, one of the few players who can match the Olympic champion at his best. As the home favourite continues to come back from a dip in performance, he had a confidence-boosting win against an in-form Lee Zii Jia. He won 18-21, 21-16, 21-15. Tomorrow’s clash may turn out to be either a one-sided affair, or an absorbing thriller.

Line Hojmark Kjaersfeldt gave a good account of herself against an electric He Bingjiao. She lost 22-20, 21-14 to the Chinese number two. Bingjiao next faces the Olympic champion Chen Yufei for a spot in the final. Interestingly, she has already beaten her compatriot twice to clinch German Open as well as Korea Masters earlier this year.

A good day for the hosts
The home favourites delivered in front of their fans to book four semifinal spots. While Ginting faces Axelsen in singles, the men’s doubles powerhouse will contest both matches in the category. Marcus Fernaldi Gideon/ Kevin Sanjaya Sukamuljo displayed flair and showmanship of the past to the delight of fans. The Minions ousted the young Malaysians Goh Sze Fei/ Nur Izzuddin in three games, winning 10-21, 21-11, 21-18.

The match of the day
Jiting/ Haodong came up with the goods to outlast the newly formed, yet nearly unstoppable Korean pair of King Min Hyuk/ Seo Seung Jae. The Korea Open winners saved multiple match points to force the decider, but it was not enough. The Chinese won the high-intensity battle with the narrowest of margins in 71 minutes. The final scoreline read: 21-16, 26-28, 21-19.