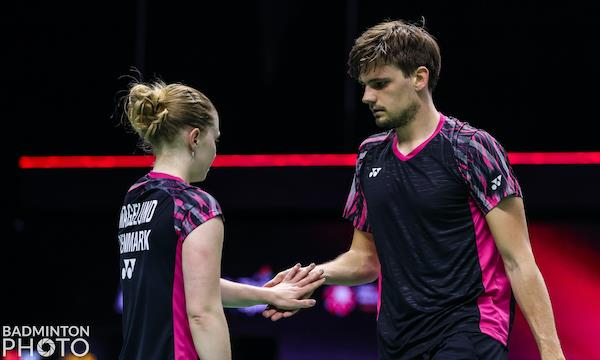 The Danish athletes will contest three semifinals later in the day. They also happen to be the only Europeans left in the competition.

The mixed doubles home duo of Mathias Thyrri/ Amalie Magelund are through to the semifinals with a hard-fought victory over Ratchapol Makkasasithorn/ Jhenicha Sudjaipraparat. They came back from a game down to win 21-23, 21-18, 21-14 to set up an interesting semifinal match against the in-form Indonesians Dejan Ferdinansyah/ Gloria Emanuelle Widjaja.

— It was a tough match, so we are very pleased with the win. We just want to make it to the finals, especially as we are playing in Denmark, Magelund pointed out.

The Danish star
While the youngsters William Kruger Boe/ Christian Faust Kjaer and Andreas Sondergaard/ Jesper Toft lost to more experienced pairs, their senior compatriot and Danish star Mads Conrad Petersen is through to the semifinals. Playing perhaps his last professional badminton tournament, the veteran has paired up with the German Jan Colin Voelker this time.

The combination ousted the Malaysians Yee Jun Chang/ Roy King Yap in straight games 21-16, 21-9. They next take on Yang Ming Tse/ Chiu Hsiang Chieh for a spot in the final.

— It is good to be back. The surroundings and the arena are familiar. Also, it is great since we play well together, the Danish legend reflected.

— I have a lot of experience against the Asians. They play a certain style and we will try to focus on ourselves, he was confident for his next match.

Christophersen beats Penty
In the only all-European quarterfinal of the day, Mads Christophersen dispatched an out-of-sorts Toby Penty in just half an hour. He won 21-13, 21-8 and will face the young Indian Kiran George later in the day.

— Our communication was good. Also, we quickly changed the strategy if things were not working. That’s why we won and we are very happy, the Singaporean duo was delighted.