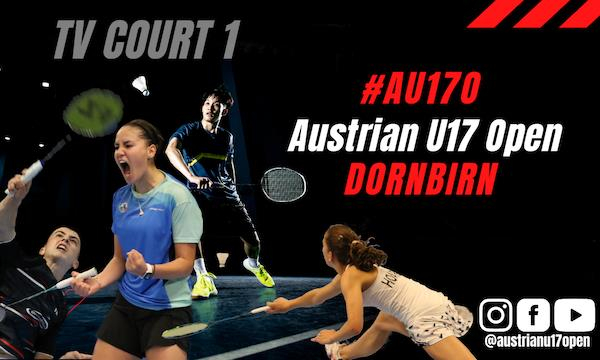 There are only a few days left until the start of the BEC U17 Tournament in Dornbirn (Austria) which can take place without any restrictions. This means that 64 athletes will be able to compete in the two single disciplines, 32 pairs in the men’s and women’s doubles, and 48 pairs will give their best in the mixed doubles.

We are especially pleased with the participation of some Ukrainian players.

We are also pleased that an Austrian, Pascal Cheng from WAT Simmering, tops the men’s singles seeding list (#4 in in the European ranking). He is followed by Marek Cepela (Czech Republic) and Roco Pipunic (Croatia).

In the women’s singles, the top positions are occupied by Barbora Bursova (Czech Republic), Leila Zarrouk (Switzerland) and Jelena Buchberger (Croatia). The top Austrian player Anja Rumpolt (from BC Götzis) has the fourth position in the list.

The Austrian U17 Open is the only European junior tournament that will be available via the Badminton Europe App (TV).

Latest news: Thanks to the cooperation with the Vorarlberger Verkehrs Verbund, players, coaches and visitors will receive free bus and train tickets. This applies not only to the route between their accommodation and the hall, but also to the entire province. This will allow everyone to make the most of their stay in this beautiful region for tourism purposes during long breaks between matches or after the tournament is over.

This year the canteen in the hall will be open again. Menus can be found on the tournament website and should be ordered in advance.