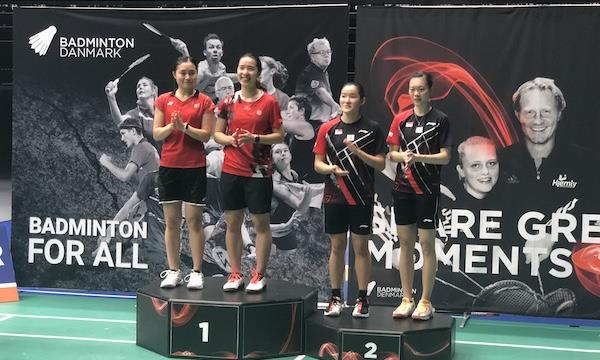 The finals day featured only one match that went the full distance. Also, each of the five disciplines was won by a different country.

Pitchamon Opatniputh from Thailand is the new rising star in women’s singles. The 15-year-old had won the Swedish Open earlier this year, turning many heads. She repeated the feat today by clinching the Denmark Masters title, beating much more experienced players on the way. Facing her third opponent from Chinese Taipei this week, Opatniputh yet again displayed a tactical awareness well beyond her years.

— I feel very proud of myself and thank you everyone for supporting me, the Thai teenager said.

The wait is over
Lu Chia Hung won a major title after four years. The Chinese Taipei athlete was humble and grateful.

— I hadn’t reached a final for a long time. Now that I have won, I hope to continue this form, he was optimistic.

— My opponent was very fast. I just tried my best to get back every shot, the champion reflected.

— We are very grateful. It is our first title as a pair. We were very focused, trusted each other, and everything went well, Widjaja was exuberant.

— The second game against the Singaporeans was very close. We did our best and finally won it. We are just so happy, the Yeungs said.

— We will go back home, practice more, and do even better next time. We give our best each time, they concluded.